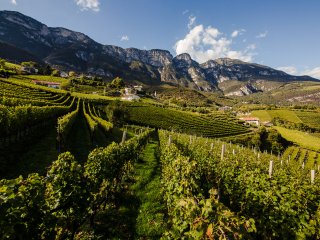 450 - 700 M
The spectacularly located district of Penon, with altitudes ranging between 450 and 700 meters, is characterized by cooling nighttime katabatic winds. The slopes face the east. This causes substantial ...
Discover the Pinot Grigio PENÓNER
Read more 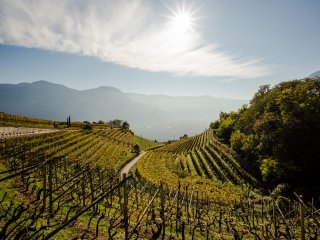 500 - 650 M
The hamlet of Hofstatt lies above the village of Kurtatsch. Cooling fall winds in the evening provide for great temperature swings between day and night and create an ideal, breezy microclimate. The ...
Discover the Pinot Bianco HOFSTATT
Read more 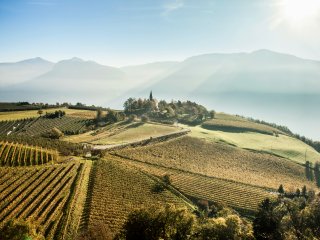 800 - 900 M
This picturesque high plateau crowning the dolomite cliffs above Kurtatsch is among the highest winegrowing locations in Alto Adige. Its elevation and the southeast facing vineyards result in some of ...
Discover the Müller Thurgau GRAUN
Read more 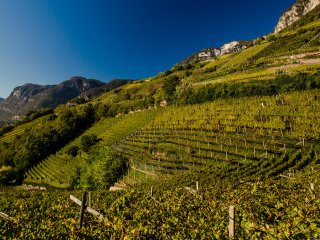 220 - 300 M
The Brenntal location north of the village of Kurtatsch belongs among the warmest locations (up to 40°C/104°F) in Alto Adige. The vines on these steep slopes with its intensive sunshine grow ...
Discover the Merlot Riserva BRENNTAL
Read more 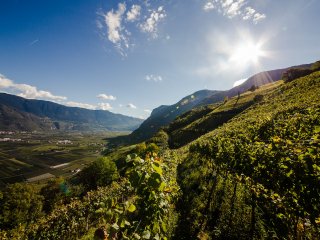 450 - 600 M
Kofl, in the Alpine area of German-speakers, means "mountain knoll". The proximity of these steep slopes to the westerly mountain range guarantees an early sunset. The evening fall winds provide for ...
Discover the Sauvignon KOFL
Read more 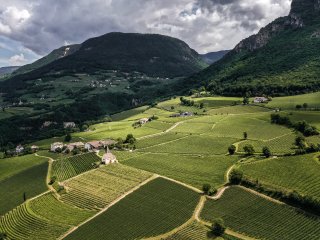 350 - 450 M
The Mazon location is one of the best-known Pinot noir locations in Italy and occupies a plateau across the valley from Kurtatsch. Here, our demanding Pinot noir vines grow on sandy, loamy ...
Discover the Pinot Nero Riserva MAZON
Read more 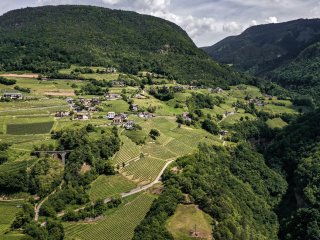 450 - 650 M
Not far from the Mazon vineyards is our second Pinot noir location, somewhat higher in altitude. While the soil characteristics of the two locations are similar, the location of Glen has somewhat ...
Discover the Pinot Nero Riserva GLEN
Read more
Facebook
Twitter
Whatsapp
Email address

We had to take three (!) deep breaths while planning the 2022 program at the beginning of the year. And thought, “How appropriate!”: three innovations were in store in the wine sector, and three big events plus three “aperitivos” were planned – to name only a few. In any case, it was clear: there was plenty to do! It was good that our motivation was as big as, or even bigger than the to-do list that we saw before us.

It started with the anniversary of our flagship, Cabernet Sauvignon Riserva FREIENFELD. Thirty years ago, the first vintage, a 1988, hit the market, and in 2018, the top wine celebrated its twentieth vintage. We needed something special to celebrate this anniversary, we should, ideally, do a tasting of the older vintages! Thanks to a French company, the rare vintages were filled into small 4cl sample bottles and the chosen vintages were sent, along with a press release, to various national and international journalists. The results were astonishing! The high quality of the articles, published personally by great names in the wine world like wine critics Jancis Robinson or James Button from Decanter, but also the points given to the wines, bore witness to the success of this campaign.  That was not all: in cooperation with the Italian wine guide Gambero Rosso, a video was filmed which told the history of the winery and especially that of Cabernet FREIENFELD.

At about the same time, things were moving forward quickly outside the winery: Vinitaly as well as the ProWein in Düsseldorf both took place once again after a two-year pause due to COVID. Together with the planning of the inauguration party to be held on the anniversary of our founding and the necessary preparations for the Wine Cellar Night, only a month after that, kept our team on their toes. Even though the temperamental weather tried to throw a monkey wrench into our plans, we were finally able, through the fantastic work of our coworkers and the associations of the village, to inaugurate our new building on 13 May. With a traditional meal of polenta and fresh sausages, accompanied by a good glass of wine, we proposed a toast to our members and partners celebrating our achievements and bolstered ourselves for the coming Wine Cellar Night.  That took place for the first time in and in front of the new wine shop and was one of our most successful up to now! Our top wines were poured from magnum bottles, and there was iconic rock and roll with William T & the Black 50‘s. Burgers from a food truck rounded out the casual and “youthful” atmosphere. A special highlight in summer was the “Aperitivo Panoramico”, which was held on the first Thursday of the month on our panorama terrace. A selection of our wines paired with select foods along with choice DJs spinning their vinyl records made for a relaxed summer mood.

In the area of winemaking, we brought forth the first innovation of the year in the spring: Cuvée Resi was introduced, and with it, probably our craziest label! It is not for nothing that we describe our Resi as “sustainable, fresh, floral, flowery, eccentric and forward-looking”.  This blend of fungus-RESIstent grape varieties supports sustainable winegrowing and thus generates added value in the long term for our members. Curious? You can find more info in the blog post.

This was, in terms of weather, also a special year for us: a dry winter, a warm May with quick blossoming, and heat and dryness in summer. The beautiful fall weather then also contributed to a harvest that began a whole 14 days earlier than usual, testing our cellar team in myriad ways. Though the harvest began 14 days earlier than last year’s, the ripeness of the grapes equaled out again towards then end. The result was a long harvest with many additional hours of work. The perseverance of our team and our members was worth it: thanks to the beautiful, mild weather in the fall, we harvested and cellared healthy, ripe grapes.

At the end of September, as the harvest reached its most intensive stage, it was finally time, after seven years and at the point of optimum drinking maturity: on 22 October, in the presence of 20 national and international wine journalists, we premiered our icon wine TRES. In the style of the successful principle of our Cortaccia Rossa event, TRES was presented among 100-point wines of the same vintage in a blind tasting. No more than three days later, TRES was presented to the local gastronomy sector. On 3 October, the wine came onto the market, and in November, the nearly 2000 bottles were gone, right down to the last bottle. All information about our top cuvee can be found here.

Outstanding financial year and a big “thank you”!

At the end of November, our successful year received its cherry on top: the re-election of our president and the outstanding end-of-year financial statements confirmed the path we had taken. The sustainable quality and value increase along with intensified image building had paid off. And as if that all hadn’t been enough to celebrate, our winery was voted by “Food & Wine” to the list of the 50 best wineries in Italy and our president to the list of the 40 most influential under 40s in the wine sector.

Now there is only one more thing to say before we can turn, on one hand, to the quieter part of the year and, on the other hand, to the necessary planning for the coming year: Thank you! Thank you to the whole team, our members, all our partners and customers. Only when all cogs mesh is it possible to do great work, and all of you have helped make this exciting, eventful and successful year possible!

There are no articles in the shopping bag